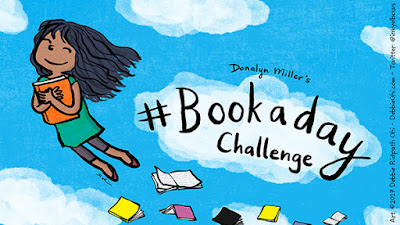 It's all the fault of Paul Jennings!
A colleague at Parkside,
he reads to kids faithfully.
Ask any of his current or former
pupils who will verify one of his favorite
authors.  I can too....we'll quickly say,
"Jerry Spinelli."
We're all in quarantine due to the
COVID 19 pandemic. However I
did return some books to a lovely
Little Free Library near my home today.
There it was! 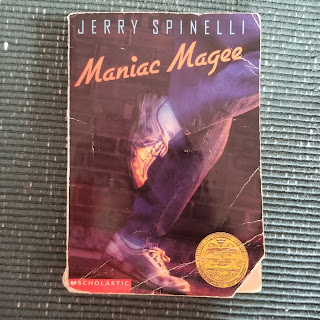 I met Maniac, Amanda, Grayson, Mars Bar,
the Pickwells, Mrs. Beale, and the McNabs.
It had anguish, terror, laughs, fun,
books, honor and there was love.
Stoke your soul with stories.
I promise, it redeems the spirit.
Help kids discover the joy of reading to
ensure they have a voice now & in the future.
#Bookaday
https://nerdybookclub.wordpress.com/2020/03/22/reading-or-not-here-we-go-a-social-distancing-bookaday-challenge-by-donalyn-miller/

Posted by Shining Moments at 7:35 PM No comments: 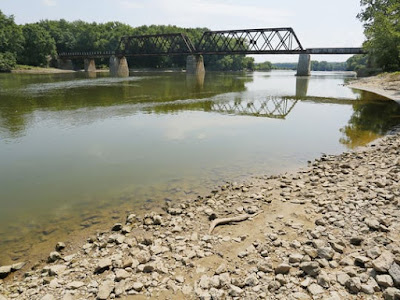 We've met, thought I do not know the names of either gentleman.  They're separated by age, six months of time and two extremes of temperature and weather that's common in the midwest.  Not a complete sentence has been uttered between us, yet the images of both men are seared into my memory.

Last year while hiking, I encountered the first man.  It was extremely hot that morning and the sun was merciless; there was nary of gust of breeze.  He was disheveled, thin, and very sunburned as our paths crossed near the Wabash River Swing Bridge. He toted a backpack and jug of water; I felt instinctively that he was young enough to be my son.   My husband and I both said, "Good morning," yet he moved slightly away from us alongside the walkway and into the  grass. As he moved on and away, I felt sick to my stomach.
This man-child was homeless.

Just last week on a bitterly cold, rainy evening I encountered a second individual who seemed vaguely familiar. Entering the Post Office late that night to retrieve mail, I unexpectedly spied
a bicycle in the lobby. A plastic bag was tied onto one of the handle bars and as I walked past the bike, a bearded gentleman nodded in my direction. At that instant, I knew our paths had crossed last summer.  While walking past The Basilica of St. Francis Xavier Church early one morning, he was sleeping on a bench and his bicycle was parked nearby.  I never disturbed his slumber back then, and now I simply nodded back to him saying, "Good evening."  I noticed a hamburger on the counter in front of him and realized that the warm, lighted lobby was offering him shelter to enjoy a simple supper. 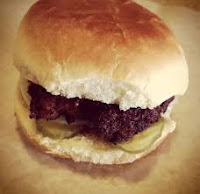 If ever we believe our efforts to build empathy in young people is fruitless, or to nurture their potential is impossible - then perhaps we
deserve to feel the pain of being lonely and lost.
I know not the story of either gentleman
but...at each step to be an intruder, never welcomed? As educators, we can and we must
do our  part and ensure that an echo,
"You are not alone" becomes reality.
~Rose West

Posted by Shining Moments at 5:11 PM No comments:

Email ThisBlogThis!Share to TwitterShare to FacebookShare to Pinterest
Labels: Homeless 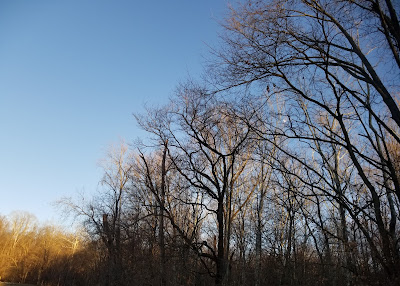 Crisp winds and sunshine
bathe the treetops in gold, on
this beautiful day.
~Rose West

Posted by Shining Moments at 9:29 PM No comments: 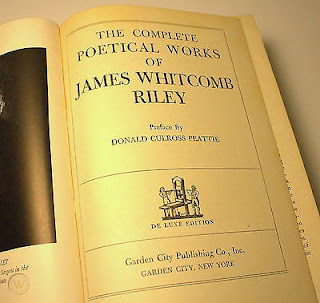 The "Little Free Library" in my
neighborhood had this book inside!

I'm not sure if my students have
visited a Little Free Library yet or not,
but hopefully we can get one started in the community of Lawrenceville!
https://littlefreelibrary.org/

The copyright of this book is 1937, having been originally published in 1883.
In the Preface, Donald Peattie describes Riley
as a "nature poet," who he saw as unequalled in
his era for creating descriptions of wildlife.
He also lauded Riley's use of dialect, to keep the
essense of his verse alive and meaningful.
One of my favorites in it, I read just today:

A Dream of Autumn
Mellow hazes, lowly  trailing
Over wood and meadow, veiling
Somber skies, with wild fowl sailing
And the north wind overleaping
Summer's brink, and flood-like sweeping
Wrecks of roses where the weeping-
Willows wring their helpless hands. 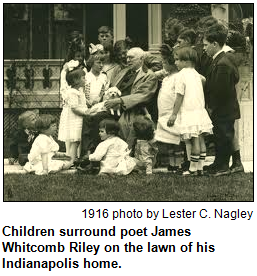 Children need to have beautiful
poetry read to them, many times over.
Determined to write more
and hone my craft, when reading
beautiful, thought provoking prose
from this Indiana author.

Posted by Shining Moments at 9:29 AM No comments: 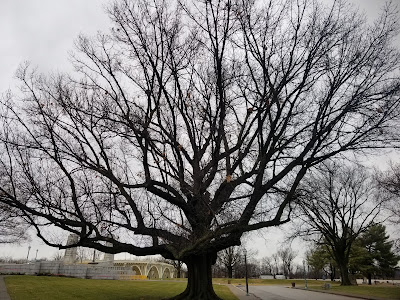 Gray, voluminous clouds
spiral and whirl above us
upon this December day.
Yet these pearls of heaven
are beautifully cut by the
coffee-black branches
of an aged Indiana Red Oak.
Oh mighty timber we'd revel
in a glimpse of the humanity
you've sheltered, stories to tell.

Posted by Shining Moments at 5:07 PM No comments:

Am I Helping or Hindering Students? 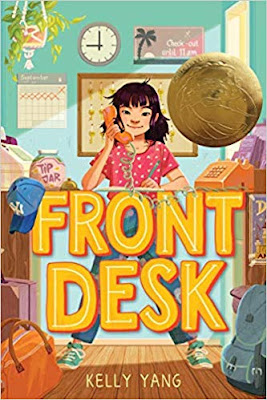 
I've decided to keep track of my        reading habits, on behalf of my students.

I ask kids to read books & explore.            Books readily available?
Is there"reading time?"
Promoting only my kind of literature?
Do pupils make personal choices?
Am I a "book snob?"
Am I reading various genres?
Is my instruction engaging & fun?
Is "reading" seen as valuable? 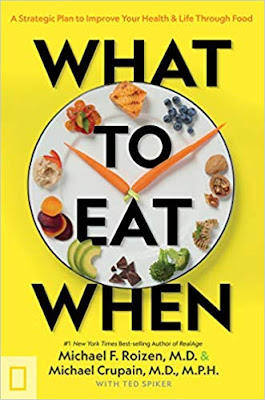 This book helped me modify,
change, and improve my eating habits. 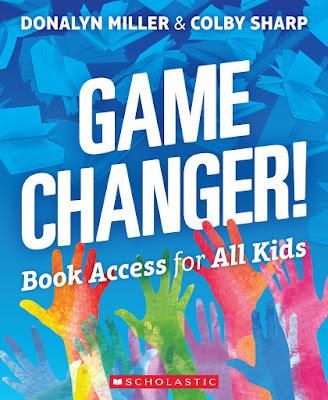 This book helped me gather ideas to
improve my interaction with student readers.
Thank you Donalyn Miller and Coby Sharp for the kickstart! 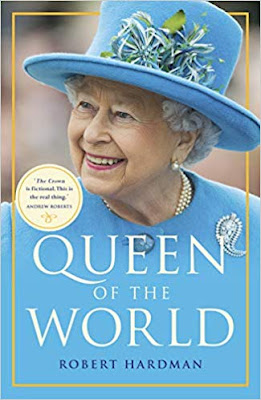 This book helped "feed" my curiosity about
Queen Elizabeth the Second. 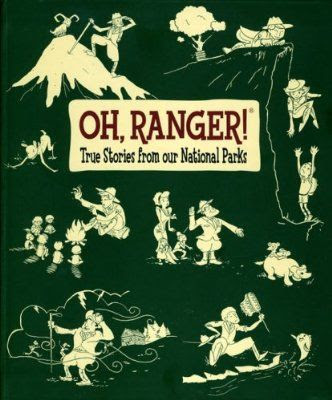 Sharing short stories from this book with my students has been
great.  I bought it this fall @ the gift shop located in our
George Rogers Clark Memorial National Park in Vincennes, Indiana where I live. 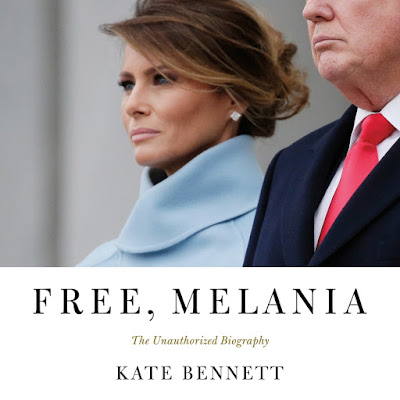 Christmas gift from "The husband,"
who realizes I like....no, I love biographies. 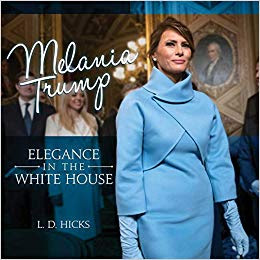 When biographies and history
are intertwined, I'm beyond excited!
"The husband" chooses excellent books for gifts. 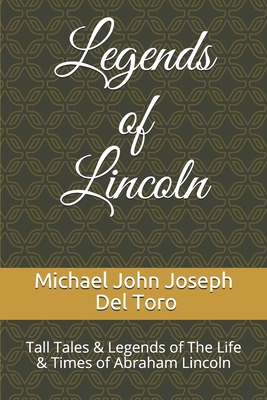 Excellent stories included here that I can share with my students, or anyone.  I'm fascinated with Abraham Lincoln. 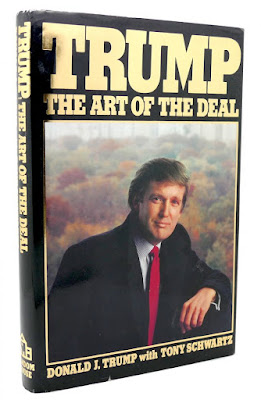 An interesting and provocative look at Mr. Donald
Trump, prior to his election as the 45th president
of The United States of America. 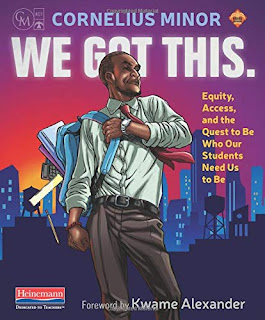 Just finished Cornelius Minor's book, after purchasing it
@ the 2019 IRC Fall Conference.  Met him and his infectious
personality and message was delightful.  #MakesMeThink
His contribution to my learning will make me a better human. 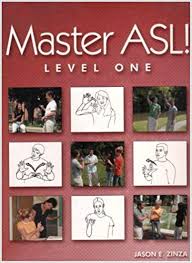 Going to develop my skill in communicating with ASL
and teach basic skills to students.  My beloved
husband Jerry is going deaf, so we're both learning
American Sign Language.  #OngoingReadingAndStudy 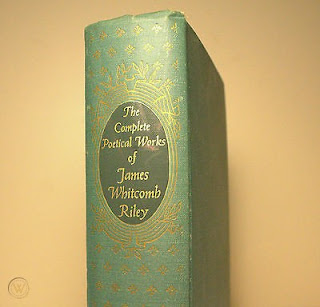 During the winter break I've been reading the
poetry of Indiana native James Whitcomb Riley.
It was in the "Little Free Library" a block from our home.
I am memorized by the beauty of his works.

Posted by Shining Moments at 7:08 PM No comments:

Email ThisBlogThis!Share to TwitterShare to FacebookShare to Pinterest
Labels: Read 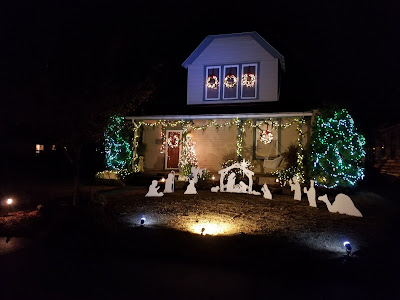 When dressed in your finest
they say it's quite true
whether choosing denim or fur
in olive green, gold or blue....
you feel "alive."

Many homes at years end are similar, with welcoming lights
or vibrant hues that frame
and safeguard the young.

So when your finery
comes off, to be put away
along with the baubles
that go back in their boxes....
let love "stay."
~Rose West

Posted by Shining Moments at 9:00 PM No comments: